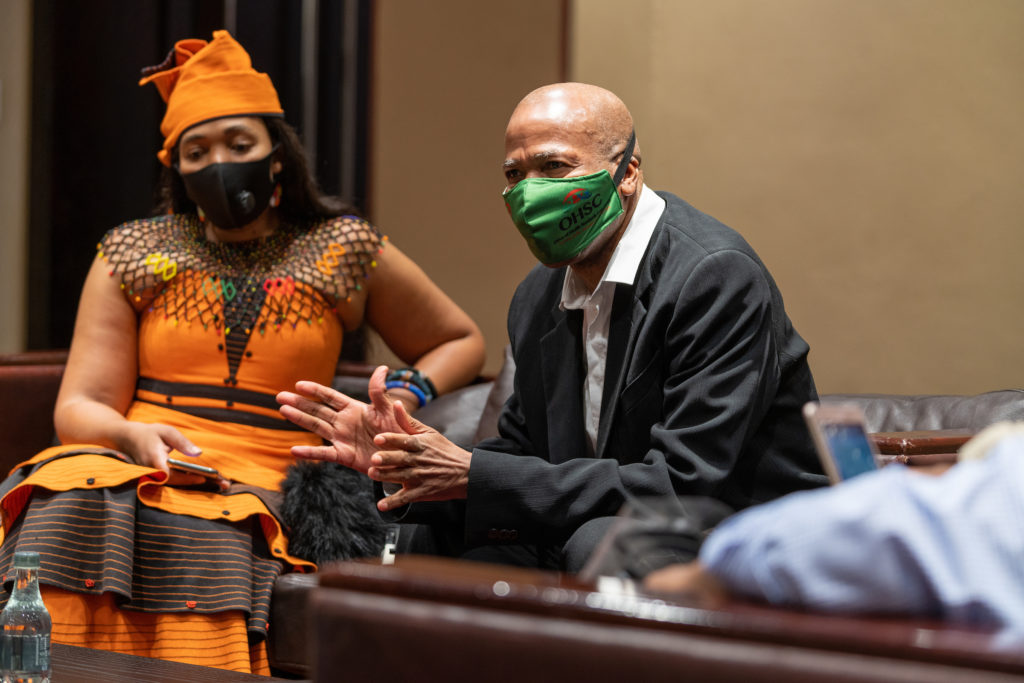 It is time for African leaders to heed the admonition of PAC founder and struggle icon Robert Mangaliso Sobukwe, to serve, suffer and sacrifice, “to eschew cowardice and self-pity, to stand for principle rather than safety,” and to empower themselves and others through education. So said Prof. Malegapuru William Makgoba, delivering the third annual Robben Island Museum (RIM) Memorial Lecture which was held this year on 5th December, in Cape Town.

Prof. Makgoba is the health ombud of SA, immunologist, physician, public health advocate, academic, former CEO of the Medical Research Council of SA and former vice-chancellor of the University of KwaZulu-Natal.

In his lecture titled “Knowledge, originality, passion and pride in Africa: the pillars and foundations of Sobukwe’s Pan Africanism in remembering Afrika,” Prof. Makgoba reflected on Sobukwe’s legacy and words, on what would have been his 96th birthday.

Prof. Makgoba echoed Sobukwe’s admonition to leaders to strive for service, rather than self-service, and had a stinging rebuke for those who fail in that:

“‘True leadership demands complete subjugation of self, absolute honesty, integrity and uprightness of character, courage and fearlessness, and above all, a consuming love for one’s people.’”

Prof. Makgoba quoted Sobukwe’s seminal SRC presidential address in 1949 at the University of Fort Hare in Alice, in the Eastern Cape, in which he urged Africans “…to not desert Africa in her hour of need” and to harness education of its people to the benefit of all.

“‘Education to us means service to Africa. …We must be the embodiment of our people’s aspirations.’ At that young age, Sobukwe was clear as daylight in his mind that his education was not for self-aggrandisement but was a tool to serve his continent. He argued that leaders needed to set very high standards so that their people must feel worthy to emulate.  Today there are leaders that we will not even wish to emulate let alone call their names without cringing,” said Makgoba.

“Suffer for the beliefs that you hold. Suffer for the principled stances that you take amid injustice. Do not cringe before your oppressors and be willing to sacrifice for your dreams and the dreams of your people and seek for mercy or fame. If you had to pay with your life in the pursuit of your ideal, so be it.  Sobukwe’s life is an illustrious example in the highest form of humanity and heroism.”

Prof. Makgoba also dwelt on the notion of Africa’s place and role in the world and said that the continent has yet made her full contribution to humanity: “We have to face the responsibility of being Africans, for it is here that I suspect we will also find our most honourable identity; an identity that will also give us a distinctive brand.

“These responsibilities are moral, intellectual and inspirational and they are served by adapting and asserting our values to the social structure and the cultural environment of globalisation.”

Prof. Makgoba evoked Sobukwe’s energetic devotion to freeing the continent of its ills and those who fail its people. He reminded the audience that Sobukwe likened Africa to a very beautiful woman who had to endure many years of abuse by different men who come and go, such that she lost her beauty and spark. “He saw it as his mission to bring back that beauty and spark to his Africa,” said Prof. Makgoba.

“In defending Africa and its beauty and potential, Sobukwe promised, ‘I will be as harsh as truth, and as uncompromising as justice. On this subject, I do not wish to think.’”

The event was attended by, among others, members of the Sobukwe family, former political prisoners and academics. RIM aims to hold its annual lecture in the birth month of the icon being celebrated. It was launched in 2018, when retired Constitutional Court Judge and human rights activist, Albie Sachs, discussed the late Nelson Mandela’s commitment to the country’s Constitution as the world celebrated Madiba’s centennial.

RIM spokesperson Morongoa Ramaboa says, “This was an auspicious evening for us and our guests and an opportunity to ponder on the role of the Island, leaders born out of political oppression through unjust incarceration and the museum as a beacon of triumph of the human spirit over extreme adversity and injustice.

“At the close of a tumultuous year, it’s fitting that we examine the concept of servant-leadership in the national, continental and global context, through the lens of intellect like Prof. Makgoba’s and with the indelible legacy of icons like Mr Sobukwe, and their unwavering commitment to Africa.”

ABOUT: Professor Malegapuru William Makgoba (born 1952 in Sekhukhune, South Africa) is a leading South African molecular immunologist, physician, public health advocate, academic and former vice-chancellor of the University of KwaZulu- Natal and former President of the MRC (SA). He is former Vice-President for Planning and Review at ISC (formerly ICSU).

He is a Fellow of the Royal College of Physicians of London; a Foreign Associate Member of the National Academy of Medicine (USA) and Fellow of Imperial College (London) Faculty of Medicine. The Academy of Science of South Africa awarded him the Science-for-Society Gold Medal (2002). He received The NRF President’s Lifetime Achiever’s Award (2011) and the MRC President’s Award (2011), both institutions’ highest honours.

A football fairy tale forged in hard work and forethought

ABOUT US
Cape Township Times aims to develop content to serve the township  population, reporting on  real stories comprehendible and relatable to the man on the ground. Cape Township Times will deliver content  with a salience put on common issues that promote social development and social awareness, underlined by a spirit of upliftment and Ubuntu.
We aim to promote the inclusivity of all diverse cultures present within the townships whilst bridging the gap, of a lack of positive impactful content that speaks to people in the township communities.
Contact us: jacqueline@capetownshiptimes.co.za
FOLLOW US
© 2021 Cape Township Times | All rights reserved
MORE STORIES
Arts & Culture