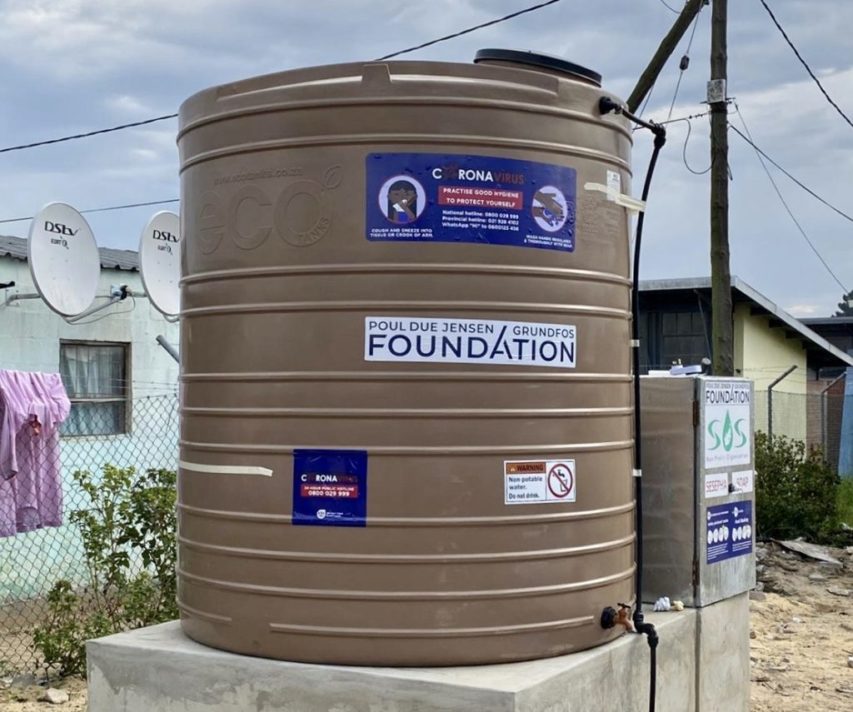 CAPE TOWN SOUTH AFRICA – The PepsiCo Foundation today announced programs that will bring much-needed access to water and sanitation for thousands of people in South Africa. Currently, over three million people do not have access to a basic water supply service, and 14.1 million people do not have access to safe sanitation*. This holistic programme marks the inaugural investment of the Foundation into Sub-Saharan Africa.

The Foundation, the philanthropic arm of leading food and beverage company PepsiCo, will invest a total of R6 million in access to water initiatives ranging from affordable washing units in homes, handwashing stations in high density areas and water saving flush toilets; to the rehabilitation of natural springs.

As part of its sustainability agenda, The PepsiCo Foundation has been working since 2006 to deliver safe water access to people around the world, and in 2016 set a goal to reach 25 million people by 2025. This goal has already been surpassed with The PepsiCo Foundation now having helped more than 44 million people gain access to safe water through distribution, purification, and conservation programmes. That’s why PepsiCo has set a new goal to reach 100 million people with safe water access by 2030 and will be focusing near-term efforts on water distribution, sanitation, and hygiene.

“PepsiCo is deeply committed to supporting the Foundation’s social development efforts and being a positive force in all the communities in which we operate,” says PepsiCo Sub-Saharan Africa CEO, Tertius Carstens. “PepsiCo is a leader when it comes to advancing a sustainable and equitable food system, with a key focus on water access, infrastructure and hygiene, and we’re excited to contribute to some excellent South African initiatives as we close in on that 100 million goal”.

This year, the most pressing needs in our communities have been exacerbated by the devastation caused by COVID-19—maintaining a supply of clean water and building infrastructure is critical to slowing the spread of the disease. The PepsiCo Foundation’s safe water access work focuses on distribution, purification and conservation programs in support of Sustainable Development Goal #6 to ensure the availability and sustainable management of clean water and sanitation for all. In light of the pandemic, efforts will focus on water distribution, sanitation, and hygiene programs.

Sustainability experts from PepsiCo Sub-Saharan Africa will be overseeing the day-to-day rollout and management of the programmes.

·        The first of the four projects, in partnership with the National Business Initiative (NBI), is the rollout of foot operated communal standpipes and hand-washing stations in the Eastern Cape. These units will be placed in areas such as schools, taxi ranks, clinics, pension pay points, informal settlements and other busy hotspot areas. The stations are connected to a raised water tank or municipal supply and use biodegradable soap. Each unit includes a tamper proof system developed to prevent vandalism and theft.

·        The second of the four projects is in partnership with the World Wide Fund for Nature (WWF-SA) and focuses on improved water access and hygiene practices for rural villages in Matatiele in the Northern Part of the Eastern Cape. A key component is the rehabilitation of natural springs. The funding allocated to this project by the Foundation will enable an additional 12 villages access to clean water, environmental education and awareness, as well as creating jobs.

·        The third project, run by Cape Town-based water and education-focussed non-profit Save our Schools (SOS), will deliver and install hand washing stations to the Bloekombos and Wallacedene informal community with over 100,000 residents. Where these stations have been installed previously at high traffic areas like taxi ranks, schools, pension points and portable toilets facilities, they have enjoyed excellent community buy-in and ownership.

The Foundation’s funding of this project includes the unit, installation, a three-month stipend for the ambassador as well as covering three months of operating and maintenance costs.

·        The fourth project, in partnership with the Water Research Commission (WRC), involves the installation of low pour flush toilets. This provides the sanitary benefits of flush toilets while using just one to two litres of water per flush. Each toilet provides a more dignified experience for an individual and offer a safer, more hygienic alternative to pit latrines.

Carstens says: “The Foundation’s backing for these four projects, each carefully selected for its impact and sustainability, signals its enthusiastic support for this crucial national priority, one we hope to build on in years to come.”

Working together with key partners on important projects such as these will allow PepsiCo to meet its new target – of delivering safe water access to 100 million people by 2030.

MATRICS, TAKE BACK YOUR FUTURE WITH VIVLIA’S SPECIALIZED EDUCATION RESOURCES

ABOUT US
Cape Township Times aims to develop content to serve the township  population, reporting on  real stories comprehendible and relatable to the man on the ground. Cape Township Times will deliver content  with a salience put on common issues that promote social development and social awareness, underlined by a spirit of upliftment and Ubuntu.
We aim to promote the inclusivity of all diverse cultures present within the townships whilst bridging the gap, of a lack of positive impactful content that speaks to people in the township communities.
Contact us: jacqueline@capetownshiptimes.co.za
FOLLOW US
© 2021 Cape Township Times | All rights reserved
MORE STORIES
Environment